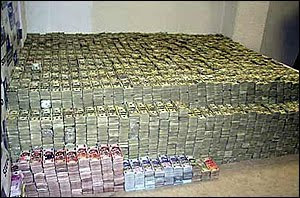 Reuters has a good story on money laundering in Mexico, and the futile efforts to block and seize drug money. (the link is in the title of this post.)

Since December 2006, Mexican authorities have confiscated about $400 million, almost none of which was seized from banks, Reuters reports, citing the Attorney General’s Office.

The U.S. Treasury, meanwhile, has blocked only about $16 million in suspected Mexican drug assets since June 2000, a Treasury official in Washington told Reuters.

Let’s put this into context: In one single day, Mexico’s narcos make as much as 7 times more than what the US Treasury has blocked in nine years.

Really want to win the drug war? Time to get to work on freezing up those funds and shutting down thousands of businesses across Mexico, and killing the economy outright.

PS – If anyone from Reuters or Bloomberg is reading this post, I’d really like to see more stories like this Reuters one by Jason Lange. The money laundering issue, as well as the economy of drugs, are fascinating, very hard to nail down, but vital elements of the drug war that are often overlooked. These two agencies could do well to help explain it, given their reporters’ superior understanding of finance/economics.