[button link=”http://www.amazon.com/s/ref=ntt_athr_dp_sr_1?_encoding=UTF8&sort=relevancerank&search-alias=books&field-author=Malcolm%20Beith”]Buy the Book![/button]
The Last Narco is the result of three years of Malcolm’s reporting on the drug war throughout Mexico. Through interviews with DEA agents, Mexican officials and drug traffickers, Malcolm chronicles the hunt for Mexico’s most-wanted man, Joaquin “El Chapo” Guzman and investigates the circumstances by which the Mexican cartels have become the world’s foremost organized crime syndicates. It is available on amazon.com or amazon.co.uk and has been translated into six languages.
[hr] 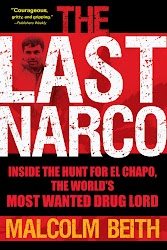 [hr]
[twocol_one]
What people are saying…

– Aram Roston, author of The Man Who Pushed America to War: The Extraordinary Life, Adventures, and Obsessions of Ahmad Chalabi

The Last Narco gracefully captures the heroic struggle of those who dare to stand up to the cartels, and the ways those cartels have tragically corrupted every aspect of Mexican law enforcement.”

The Last Narco is a brave and terrific headlong journalistic trek into the dangerous, and immensely relevant, terrain of drug trafficking in Mexico, and the life and times of its foremost practitioner.”

– Sam Quinones, author of True Tales from Another Mexico

Malcolm Beith slaps our faces with our ignorance. We barely know Mexico, and understand even less of its major industry, drugs. In The Last Narco, he gives us a look into a place our government either denies or lies about. This time you can run, but you can’t hide.”

No ‘war on terror’ was ever as terrifying as the ferocious wars of the drug lords in Mexico. In The Last Narco, Malcolm Beith courageously takes us to the front lines in the heart of the Mexican badlands—and also right on the border of the United States. This is a threat to homeland security that is too often ignored by the press and public, and this is the book that brings it all into focus. A must read.”

Malcolm Beith risked life and limb to tell the inside story of Joaquín ‘El Chapo’ Guzmán Loera, Mexico’s notorious drug capo. A novelist could not have presented a more intriguing or compelling tale of corruption, intimidation, murder, blood feuds, life-and-death negotiations, and the entrepreneurial skill of a near-mythic figure whom Forbes Magazine named one of the world’s richest men. Beith’s superb book corroborates the cliché that fact is stranger than fiction.”

– George W. Grayson, professor of government at the College of William & Mary and the author of Mexico: Narco-Violence and a Failed State?

A fascinating read that covers much of the last three decades of drug trafficking in Mexico and gives an on-the-ground perspective of the issues involved.”

Malcolm Beith brings to bear his substantial journalistic and narrative skills, telling a riveting tale of Mexico’s most powerful drug lord. More than just telling a fascinating story, Beith cogently lays out the evolution of the Mexican drug trade and what it means for Mexico, and U.S.-Mexico relations, going forward.”

Joaquin Guzman is the most famous and intensely wanted criminal boss alive today. Malcolm Beith has done us all a service by scouring the bandit back roads and labyrinthine pathways of urban power in Mexico in search of this enigmatic underworld mastermind. The Last Narco will be of interest to social scientists, criminologists and other readers who wish to understand the international drug trade, contemporary Mexico and U.S.-Mexico relations.”

– Howard Campbell, Professor of Anthropology at the University of Texas-El Paso, and author of “Drug War Zone: Frontline Dispatches from the Streets of El Paso and Juárez”

The Last Narco is not only a fine piece of investigative journalism but also an excellent introduction to the intricate history of the drug trade and the long-term collusion between politicians and narcos over the past fifty years… A perfect introduction for students of all ages interested in the violent effects of U.S. addiction over the border in Mexico.”

Brave and honest… as reliable a guide as you are likely to get to the cross-currents of the drug war.”

An excellent look at [Mexico’s] monstrous cartels…[Beith] is a journalist first: his opinions are, for the most part, kept to himself. [He] tracks Guzmán’s career – his loves, his rivals, his victims – from the early days… The only real fault is the title, because the chance that El Chapo is indeed ‘the last narco’ seems little more than wishful thinking.”

Impressive. It takes cojones just to write a book about El Chapo [and] travel alone into the lawless sierra to poke around on his home turf. Beith acknowledges that his book is not meant to be a true investigative endeavor, but he’s selling himself short.”

The lawless narcotics culture has destroyed the quality of life in hundreds, maybe thousands, of Mexican cities… Beith bravely documents the carnage… Important.”

An extraordinary read… vile and distressing.”

[The Last Narco] doesn’t leave out one key moment in the life of this criminal.”

A startling account of a desperate problem boiling on and spilling over the border.”

Constantly gripping… its tales of cat-and-mouse games with authority provide eye-popping anecdotes on almost every page. It’s like Scarface but really, really depressing – what’s not to like?”

Riveting… Malcolm Beith gives us the inside dope on the most powerful capo of them all. Impressive detail.”

2 thoughts on “The Last Narco by Malcolm Beith”