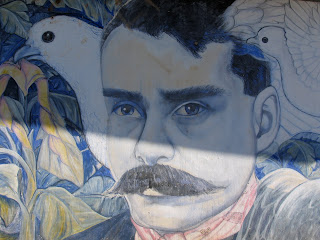 It’s the end of what has inarguably been a dismal year for Mexico. Drug-related violence has increased, the economy has plunged, swine flu has battered the already-hurt tourism industry, and so on.

Now there’s talk about a third revolution in 2010, given that these events tend to happen in 100 year cycles in Mexico.

Enough of the fatalism. Mexico is not a failed state, but does risk becoming one if the people just let things happen. If there is going to be a revolution, the people have to play their part. It can’t just happen without them.

There is no evidence that either rebel groups like the EPR or the drug cartels are going after the state. Thus far, they have shown no interest in doing so. Contrary to hype, the cartels have also shown very little desire to go after innocent civilians, either. (The Sept. 15, 2008 attacks in Morelia remain the horrific exception.)

Rebel groups like the EPR know damn well that the worse thing they can possibly do is attack or affect civilians directly. Since they found their brains, they’ve only attacked Pemex facilities and the like, and in early morning hours when no one is working there. Sure, we can expect some more attacks of that nature, but that’s certainly not a revolution. Maybe they’ll storm a town or two, but neither is that.

The revolution that Mexico needs, and the people want, is a jobs revolution. Hard-core lefties these days aren’t talking about overthrowing the government, they’re talking about earning money to support their families and god help us all, moving up a class. At least, that’s the sense I get.

So it’s up to the government of Mexico to create a revolution, one that will spur Mexico further forward in its quest for democracy and first-world status.

Mexico is still a fantastic country, with a million wonderful things and tremendous potential. People, don’t drop the ball, disavow all responsibility and then say “Ooops, se cayo.”

Feliz ano nuevo! (apologies, I can’t do “tildes” on my computer, so if this seems crude to you, I’m sorry)

PS – The Gulf cartel and Zetas are now being called “The Company” by the U.S. Justice Department. Does anyone know why? Weird.